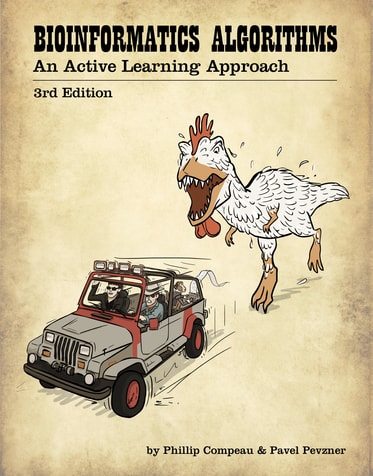 The textbook Bioinformatics Algorithms: an Active Learning Approach has now been adopted by 140+ instructors from 40+ countries. Since all these instructors cover similar materials, we have decided to launch a multi-university bioinformatics class that will bring multiple instructors together to enhance the educational experience of students across all participating universities and to facilitate the exchange of the course materials and pedagogical ideas between various instructors.

This educational collaboration will be directed by Professor Niema Moshiri. at University of California at San Diego, an expert in online education technologies (see his TEDx talk The Era of Online Learning. ). Dr. Moshiri will analyze the students’ experiences across various universities, study benefits and limitations of a multi-university class, and will evaluate whether this endeavor should be further scaled in the following years.

Learrn more about the Winter 2021 instructors on our About Us page.

Additionally, all students are encouraged to participate in a research-focused “HiFiAssembler” project aimed at genome assembly using the newly emerged: HiFi technology based on long and accurate reads. The genome assembly problem amounts to assembling a genome from a myriad of its error-prone and overlapping fragments, the largest jigsaw puzzle ever assembled by humans. Using overlaps between these short fragments (called reads), you need to reconstruct the genome.

The HiFi technology, developed in 2019, is revolutionizing the way we sequence the genomes – it already contributed to the COMPLETE human genome assembly by the Telomere-To-Telomere consortium in Fall 2020, the problem that remained unsolved since 2000 when the DRAFT human genome was first assembled by the Human Genome Project. See a short video explaining the benefits of HiFi technology:

However, assembly of HiFi reads remains a poorly explored area with many open questions – there are still only three HiFi assemblers and they all were developed very recently:

We will summarize these open questions and will invite you to develop a new HiFi assembler from scratch and address these questions. You will be provided with the sets of HiFi reads for E. coli, fruit fly, and the human X chromosome. Your goal is to assemble these reads, evaluate the quality of assembly, and prepare a short power point presentation (maximum 10 pages) outlining your approach and summarizing your results. The submitted assemblers will be evaluated (based on the assembly quality, the running time, and the originality of the approach) and the winning assembly team will make a short presentation for the entire multi-university class.

Click here to learn more about the HiFiAssembler project, upload the datasets, and start working on your assembler!

This is our first experience in running a multi-university course and we anticipate that we may overlook something – please do not hesitate to send us your suggestions and help us to succeed!